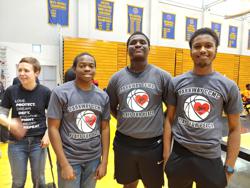 It started as a class project and turned into so much more.

Students at Parkway Center City Middle College are required to take courses at Community College of Philadelphia during their junior and senior years and will graduate from high school with an associates degree from CCP.

So juniors Frank Corbit-Gillis, Jaden Burnett and Quadir Gamble found themselves in a sociology course sitting in front of CCP professor Jamie Gusrang earlier this year.

Professor Gusrang told the students that they would have to volunteer some hours to a program like Philabundance or come up with an independent project as part of their coursework. Corbit-Gillis, being a third-year point guard on Parkway’s basketball team, came up with the idea of holding a basketball tournament.

Burnett and Gamble jumped in. It didn’t matter that none of them had ever planned a basketball tournament before. They have been friends since starting high school and they knew that they could pull this off.

The idea became reality on Monday, Nov. 25 after less than two months of planning. The reality was a three-hour extravaganza at CCP’s gym at 18th and Spring Garden that brought attention to gun violence in the city of Philadelphia.

The student body marched five blocks en masse from their building at 13th and Spring Garden and sat in the bleachers, enthusiastically cheering and quietly listening when it was called for.

Parkway’s Step Team was there as were the cheerleaders. There were student and adult speakers who addressed the student body, telling their stories of unfortunate encounters with gun violence in their lives. Mothers Bonded By Grief were there to lend support.

“Oh my goodness,” Gusrang said. “This really impressed me. They’re high school students, they came up with a really big project, they’ve been an asset to our class.”

There was also some basketball to be played.

In a pep rally-type atmosphere, juniors played a team of freshmen in the first game and fittingly, Corbit-Gillis hit the first shot of the game - a nifty three-pointer from the top of the key – in a victory for the juniors. The second game featured seniors and sophomores. The winners and losers would play each other before finally, the student champion team played a team of police officers from the 9th District. Through it all, Burnett was talking trash as the public address announcer and everyone was having a good old time.

“This is very nice,” 20-year police officer Jesse O’Shea of the 9th District said. “When they put it out there, our guys were super receptive. The more interaction, the better. We feel like we have common ground on so many things and sports is number one.”

Virtually everyone in the building were wearing tournament t-shirts. On the back of those shirts were some pretty chilling statistics:

* 63 percent of Parkway students have witnessed a shooting

* 77 percent have lost a blood relative to gun violence

* 16 percent have been shot at

* 63 percent regularly worry about their safety.

Through a Go Fund Me page and student donations at the door, the tournament raised over $1,600. Mothers Bonded By Grief intended to use that money to buy 100 gifts for kids who lost a loved one to gun violence over the last year.

“One of the things that we teach our students is that their voice matters, that ideas matter,” Parkway principal Anh Nguyen said. “And when they put it to use, you can see it. If you look at the outcome, if you look at all the students here, it brings the community together. So these are our entrepreneurs of tomorrow. I am extremely proud.”

We can all be proud of students like Frank Corbit-Gillis, Jaden Burnett and Quadir Gamble who saw a problem affecting their families, their school and their city and tried to do something about it.