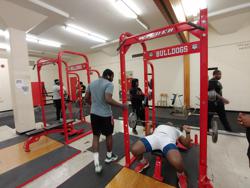 If you venture into the bowels of Simon Gratz Mastery Charter High School’s basement on any given day, you will see athletes working out in the weight room or in the turf room next door. Nothing unusual there. Football players begin working out for next season around this time which is a big reason why the Bulldogs have had a successful gridiron program for a long time.

Not all of them are football players. Walk up to senior Anthony Smith and ask him what sport he plays and you might be surprised by the answer. His response would be rugby.

Rugby? What the heck is that?

Rugby is a sport that was born in England and has been played since the 1830’s. But go to any playground in the city of Philadelphia and you won’t see kids engaged in a spirited game of rugby.

Think of rugby as football without pads. The ball is a bit bigger and rounder than a football and gets passed around quite a bit, much like basketball, in an attempt to score. You have to be a tough character to tackle an opponent without pads.

Hunter wrestled and played baseball in high school in Richmond, Va., but discovered rugby at Guilford College in North Carolina. He got pretty good at it, played for a time in New Zealand, and rose to become the head coach at the University of Pennsylvania.

So when he became a guidance counselor at Gratz, he brought his love of rugby along with him, wrote a grant over two years ago, and was able to introduce the club sport to his students who took to it like a duck to water.

Hunter has had no problem attracting players and has even had to make some cuts. But once a player is with the program and works hard, doors open for them that otherwise may never have opened. The Bulldogs have a seven-on-seven team and started a 15-on-15 team a year ago.

Working out in the weight room on a cold day in the third week of December were former Gratz students Anthony McFarland who earned a scholarship at Mount St. Mary’s University in Emmitsburg, Md., along with Desmond Johnson and Jawaan Anderson who play at West Chester University.

“We don’t create a sport model where most of the kids are working toward trying to become a pro rugby player,” Hunter said. “But they know if they get good at it and they participate in it and they go out to the clubs and they meet those people in the clubs, that they’re going to be valued and they’re going to have a network of people that can help them find better opportunities.”

One who has taken advantage of those opportunities is Johnson.

“I started playing and I felt like I was real good at it,” Johnson said. “So I took advantage of every opportunity that came to me. I was able to play outside the state a couple of times, I went to Utah to play (with #1 ranked Atlantis) for the national (championship) and it gave me the drive to want to play some more. So when I got to college, I got the opportunity and I just ran with it.”

Smith was going to play football, but Hunter talked to him about rugby and he has played for the last couple of years and is a captain for his senior year. Because of rugby, he is looking at continuing his education at Mount St. Mary’s or Clarion University where he wants to major in nursing. He also plays for the Philadelphia-Whitemarsh Rugby Football Club.

What he has gotten from rugby is incalculable.

“Brotherhood, honesty, competitiveness,” Smith listed. “I’ve learned a lot of things. I made a few mistakes (in rugby). If you want to count, I don’t know how many, but it was a few mistakes. Hunter taught me more, though. I learned to do my best from the best.

“I started getting into programs like Philadelphia-Whitemarsh and then I started learning. I’m playing spring, summer, fall, all the seasons all around. I’m still playing now. I’m someone who has experience and knows the ropes a little bit. I can show (teammates) how to do things just to help them get through what they need to get through; just do the process so they won’t be like me and struggle. But they’re going mess up like I did.”

It’s just part of the learning process of playing a sport that wasn’t part of their growing up. But once the skill set is there and the love of the sport emerges, the sky is the limit for these kids from North Philly.

The Bulldogs play seven games against mostly Catholic League teams like Cardinal O’Hara, Father Judge, Roman Catholic, St. Joseph’s Prep and LaSalle. They open the season on March 15 against Salesianum of Delaware and will play some Friday night home games like they do in football. They will play into the first week of June.