24 Hours is Not Enough for This Girl 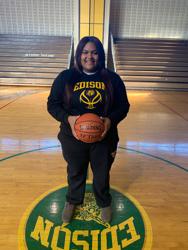 It’s too bad that there are only 24 hours in a day. If there were more hours in a day, Edison senior Barbara Dussinger would figure out something to do with the extra time.

She already has a handle on the 24 hours a day she has to work with.

The culinary arts student is a center and three-year captain of the successful Owls’ basketball team. She has played defensive tackle and nose guard on the football team for two years, participated in volleyball and found time to run in a cross-country meet – all in the fall – and plays third base for the softball team in the spring. She mentors other students through the Peer Group Connection and did we also mention that she is also the student body president?

So what keeps her on the go?

“I don’t know,” she said. “I just don’t want to be bored. I’d rather have fun and do something than stay at home and do nothing.”

When Dussinger landed in the halls of Edison, she was your typical freshman – not a bad kid, but LOUD.

“When I first came here my ninth grade year, I wasn’t the best student academically,” Barb said. “Behavior-wise, I was good. I really didn’t get into trouble. I was just loud. I was just loud everywhere I went. Academically-wise, I wasn’t focused. I felt like, ‘Oh, I’m a high schooler now. I’m just going to have fun.’ I never cut, though. I always came to class. I just didn’t pay attention in class. I was always on my phone.

“As the years went by, I started to focus more. Sometimes it is hard for me to focus in class. My grades got better, but they weren’t as good as they should have been. But I definitely did start getting better in class. I wasn’t as loud. You can really ask anybody in the school. They will definitely tell you that I have changed for the better. There are staff members here that have known me since fifth grade and they’ve seen big changes. This year, definitely, is my best year academically. Behavior-wise, I’ve always been good. I’ve never really had a problem with my behavior.”

Dussinger, who has all A’s along with one B, is now the one pushing her fellow students to get to class and get good grades as president of student council.

“We’re showing them that you get good things out of coming to school on time, going to class, doing all of your work to get good grades,” Barb said. “We like to do activities, so we reward them. If you’re doing good, you get to participate in activities. Even the kids that don’t like to go to class and have low grades, we say, ‘this could be you. Try to do better, try to go to class.

“If you need help, there’s people around the school that will help you. There are a lot of staff members who will help you. Even the climate staff that stand in the hallways and tell you to go to class, they’re here to help because they want you to do good in life.’ So we try to do as many things as we can around the school to get everybody involved and show them that you can get good things from good grades.”

Dussinger has gladly extended a helping hand in whatever activity she is involved in at any given moment. When a member of the Edison staff was trying to get student government off the ground, Dussinger was there to sign up students and then won a three-way election for president. When Edison football coach Bill Hughes approached her about playing for the Owls, she jumped into the fire two years ago even though she had never played a down of football in her life. When cross-country coach Sarah Rooney needed someone to run a meet at Belmont Plateau so that her team’s points would count, Barb jumped into the breach. It’s not easy for a 6-foot-1 inch football lineman to run up Parachute Hill, but she did it.

And now, as a three-year captain on the basketball team, her leadership has been called on by Rooney to help show her younger teammates the way things are done.

“It’s like having an assistant coach out on the court,” Rooney said. “We’re 9-2 because I have that kind of leadership out there. I have someone who can teach the younger girls develop skills while I’m working on fundamentals with the others. She’s an extra mentor and coach every single practice.

In whatever spare time Dussinger gets, she likes to listen to all kinds of music like pop, rhythm and blues and soul, read fiction, watch TV and sleep. She is looking at continuing her education at Community College of Philadelphia or possibly Kutztown University.

But before the future catches up with her, she still has a basketball season to finish, a softball season to compete in and more students and classmates to have an impact on.

Rest assured that she will be using every bit of her 24-hour day to do the best she can to help her teams, her fellow students and her school.