A Natural on and off the Field 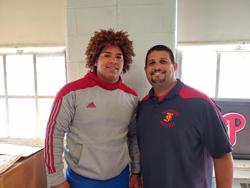 Some people just have that certain something that is unmistakable. They walk into a room and you know they are there even if they didn’t say a word. Some are born leaders. Some are people that everyone wants to be around.

Well, Frankford senior Darlyn Uceta is one of those people.

Whether it’s walking the hallways at school or patrolling the infield for the Pioneers’ baseball team, Uceta has that certain something.

“I’ll tell you what. The really special thing about Darlyn is his leadership ability,” Frankford baseball coach Juan Namnun said. “When you hear the term ‘natural born leader’, the kid exudes leadership. He is followed, not just by baseball players, not just by athletes, but by kids in this entire building.

“Obviously, he’s a big, strong looking kid. So of course, naturally, that’s something kids will look at. But his demeanor – he’s so calm - he’s very poised. That’s probably my favorite thing about him, how smooth of a leader he is.”

Uceta was born in the Dominican Republic, came to the United States in 2011, went back to the DR for a bit, then returned for good in 2013 with his family. Coming into the school district as a sixth grader at Woodrow Wilson Middle School, it took him less than a year to learn English.

He attended Northeast High for two years and was a member of the baseball team before his family moved to Frankford. Northeast’s loss was Frankford’s gain.

Uceta, who started playing baseball at the early age of four or five years old, has a special love of the game.

“I like everything about it,” Uceta said of baseball. “It’s great.  Most of the time, I like hitting. I like to hit and pitch. I feel really confident about myself. I’ve been playing baseball since I was small. It’s the only sport that I consider actually having fun in it and a sport that I love.”

He not only stands out on the baseball field, where he was named first team all-Public at designated hitter last season, but also on the soccer pitch where he earned second team all-Public this past season. It was the first time that he played soccer on the high school level. He tried it because Namnun insists that his players participate in another sport to at least stay in shape for baseball.

“I play other sports for fun, but I never played it on a team,” Uceta said. “I always liked soccer, but every time it was soccer season, it was during the spring. Outside of the school, people play soccer during baseball season. So I could not play soccer. I always loved to play soccer. I like to run a lot.”

As much as Uceta stands out on the baseball and soccer fields, perhaps he stands out the most in school.

Uceta is a member of a group called the Peer Group Connection which is a way for older students to share experiences and give advice to younger students. PGC gives those younger students tools to perhaps deal with people and situations in a non-confrontational way.

Approximately 40 percent of the student population at Frankford is Hispanic and not all of them speak English. There was a group of 28 Spanish-speaking ninth-grade students that PGC was trying to work with and was not making much headway because of the language barrier. Enter Uceta.

“I teach a whole group of 28 kids in Spanish,” Uceta said. “One girl explains it in English and I translate it in Spanish so they can understand. I have a bond with them. They get along with me. They understand the class. It’s a great time.

“I feel great. I feel comfortable. If it would have been only in English, I say they wouldn’t feel the way they feel out there. I translate so they can get an understanding of the lesson.”

Namnun, whose wife, Lena, is the PGC moderator, couldn’t speak highly enough of the impact Ucena has had on those students.

“And she told me because he started speaking Spanish to these Spanish freshmen, they just opened up and started really getting involved, getting meaning to everything. And it just made everybody so content and happy to get involved because of his ability to communicate and also be relatable.”

During this school year, he short-circuited a pair of fights that were brewing in the Frankford lunchroom. Usually, there are deans of discipline assigned to the lunchroom to handle those situations, but Uceta got there first and made a difference.

“Sometimes I find myself where if I can help somebody else try to break up a fight - not get into the fight, but try to stop it so it won’t happen - and they won’t get in trouble.”

It’s a big relief to the deans on duty in the lunchroom, who are sometimes spread a bit thin, that they know Darlyn is helping out where he can.

“This happened a couple times this year alone,” Namnun said. “I had a dean call me and say, ‘Your guy’s a lifesaver, man, because he’s there before anything happens and he’s diffusing a situation.’ He’s like the Godfather down there. He just walks in and everybody just stops doing what they’re doing.”

He could be getting valuable training for his future. He wants to major in criminal justice or perhaps physical therapy. He’s trying to decide between Chestnut Hill College, Monroe College, Lackawanna College and Northampton Community College. But he knows he got a great start at Frankford.

“Frankford did a lot for me,” Uceta said. “It taught me a lot, made me a better person.”

And Frankford is better off because of him.